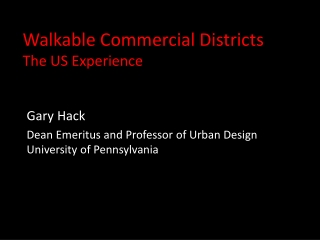 Walkable Commercial Districts The US Experience

Walkable Commercial Districts The US Experience. Gary Hack Dean Emeritus and Professor of Urban Design University of Pennsylvania. Gary Hack …… (imagine me speaking). What do we mean by “walkable commercial areas?”.

Walkable Commercial Districts The US Experience

Hit the Streets - . november 25. do you remember?. what are some times when you have been in a large crowd? what thoughts

Streets of London - . by ralph mctell. ralph mctell (born ralph may in farnborough, kent, england, 3 december 1944) is an

INTEGRATED STREETS - . kleinburg possibilities. what about pedestrians?. often forgotten in design we are all

Flowers on Jerusalem Streets - . january 2010. the weather has been absolutely remarkable so far with warm temperatures

Viva Streets - . how to : select a location, plan for street closures, schedule the event, plan fun activities as part of

Seminary of the Streets - Worship so they took him and brought him to the areopagus and asked him, may we know what this