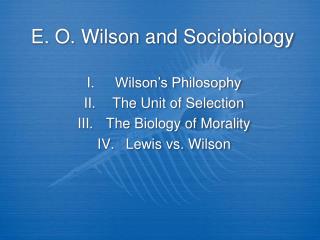 E. O. Wilson and Sociobiology. Wilson’s Philosophy The Unit of Selection The Biology of Morality Lewis vs. Wilson. Wilson ’ s Philosophy . Like Skinner, Wilson is a physicalist: everything that exists (except perhaps the very beginning of the cosmos) is to be explained physically.

E. O. Wilson, 2002 - . the totality of life, known as the biosphere to scientists and creation to theologians, is a

Sociobiology - . the study of the relationship between behavior and natural selection. sociobiological theory states that

E. O. Wilson | Harvard University - “ we are drowning in information, while starving for wisdom. the world henceforth

Sociobiology and Evolutionary Psychology - Explaining behavior. find the antecedent events that made the behavior take

Taft and Wilson - . the main idea progressive reforms continued during the taft and wilson presidencies, focusing on

Wilson and Versailles - . battle of the somme. british offensive against the germans in northern france on july 1, first

Taft and Wilson - . section 4. i. progressivism under taft. a. taft as president. created dept. of labor 16 th amendment

Taft and Wilson - . i. taft’s administration. a. taft pursued a cautiously progressive agenda, which upset many of the

Roosevelt and Wilson - . the bull moose and the professor. roosevelt becomes president. republican; 1901-1909 – the