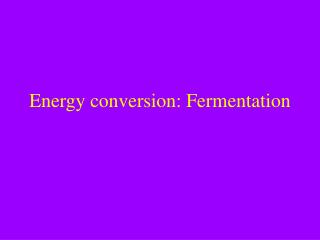 Energy conversion: Fermentation. Announcements. No quiz during next week lab. session Write an informal summary about today lab. I will discus this at the end of the lab. -Photosynthesis will be taught in 2 lab. session come prepared (as usual) and for the first week

EDD5157A Integrated Science Assignments: 20 minutes powerpoint - . in this power point, the following issues will be

FERMENTATION - . by: ms. saba inayat ali. learning objectives. at the end of this topic, students will be able to:

Tasting Descriptors - . how to d escribe what’s in y our glass. what are we not talking about?. judging. specific

The Fermentation of Food - . chapter 22. objectives. terms. describe the history of fermentation explain why food is

Bloat - . brendan kraus, dvm. the rumen. a specialized fermentation vat in the bovine fermentation is controlled through

Fermentation - . oxygen is not present convert pyruvic acid into other compounds occurs in the cytosol does not produce

Lignocellulosic biomass to ethanol-hydrolysis and fermentation - . agenda. enzymatic hydrolysis cellulases what is

Cellular Respiration and Fermentation - . how energy goes from chemical bond to a usable form…. 1. sun. 2. light