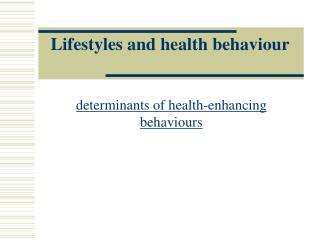 Health Behaviour - . a presentation by candace sirjoosingh march 26, 2008. which one is better?. we all know the healthy

LIFESTYLES AFFECT YOUR HEALTH - Health education for your

Health knowledge, attitudes and behaviour - . r.fielding. learning objectives. at the end of this lecture, you should be

Personality and Lifestyles - . personality refers to a person’s unique psychological makeup and how it consistently

Lifestyles - . in ocean zones. in the zone lifestyles. explanation: this power point is included in this presentation as

Lifestyles - . in ocean zones. in the zone lifestyles. goals: describe and identify the different zones and layers of the