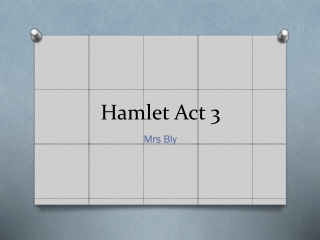 HAMLET ACT III - . at the bell:. write about a time where you have planned or plotted against someone. what do you know?.

Hamlet Act Three - . naomi vosneac and kristen waechter. thesis. our thesis is based through a feminist belief that if

Hamlet Act I - . “something is rotten in the state of denmark.”. act i, scene i discussion. exposition:

Hamlet Act III - . scene i. scene one. we have now viewed two film versions of the “to be or not to be” soliloquy.

Hamlet Act 2 - . summarizing &amp; paraphrasing for act 2. don’t forget: you can copy-paste this slide into other

Hamlet Act 1 - . setting:. a. the scene begins at midnight with fear, mystery, and death setting the tone for the

Hamlet Act V - Hamlet act v. this scene opens in the graveyard and the gravediggers/clowns are preparing for opelia’s

Hamlet Act ONE Review - . act one questions. who, what, why?. 1.what reasons do laertes and polonius give for their

An Enemy of the People - . welcome!. this small norwegian town is buzzing with the new addition of kirsten springs, a