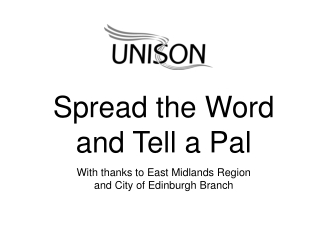 Spread the Word and Tell a Pal With thanks to East Midlands Region and City of Edinburgh Branch. Challenges we face from the Coalition Government are fundamental:-. Cuts and privatisation. Ideological opposition to public services Co-ordinated lobby to cut pay and pensions

Spread the word - . hold an event. get your mp involved. organise a photo shoot. get pupils involved. involve your

The East Midlands Platform - . 19 th nov 2013. what is the east midlands platform?. a multi-partner forum launched in

Improvements and Efficiencies in the East Midlands

The City of Edinburgh Council - . formed in 1996 from a regional and district council. 20,000 staff with a budget of

Backpage East Midlands - New to midlands, worried about the fact that were to give a boost to your business, then

Spread the Word about your Business with Leaflets and Flyers - Www.printways.co.uk - one of the best advantages of