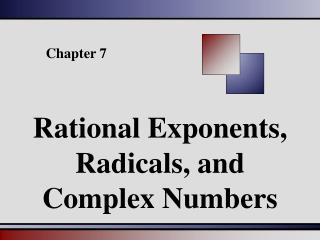 Free radicals and antioxidants - . what is „free radical“? reactive oxygen and nitrogen species (rons) are the rons

Complex Variables - . complex numbers are really two numbers packaged into one entity (much like matrices). the two

Chapter 39 - . complex numbers. consist of all positive and negative integers , all rational numbers and irrational

Unit 5 Radicals and Equations of a Line - . this unit has a review section on solving/reducing radicals, and the laws of