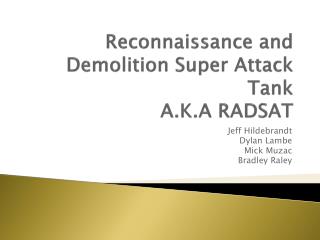 Reconnaissance and Demolition Super Attack Tank A.K.A RADSAT. Jeff Hildebrandt Dylan Lambe Mick Muzac Bradley Raley. About RADSAT. RADSAT is a semi-autonomous tank designed to find, lock onto, and shoot a target specified by its color. Reconnaissance attack - Mapping web applications note: unless noted differently, all scanned figures were from the

AC and ARNG Attack Reconnaissance Bns - . bottom line up front :. “bog” is being used to justify removal of arng

ATTACK HELICOPTERS IN THE RECONNAISSANCE ROLE - . leader training program. purpose. provide a basis for discussion to

Super Deep Penetration a.k.a ‘Usherenko effect” - . super deep penetration – a unique methodology and a process of

RECONNAISSANCE - Low level : characterized by a constant altitude and airspeed. enemy contact is not likely. contour :

Demolition - . how much do you know about demolition?. appointment of a competent contractor, how to assess competency?.

Demolition - Remember!. the cdm regs 1994 apply to all

a.k.a. - April 7 , 2014. a.k.a. everything you ever wanted to know about healthcare technology public relations, but were