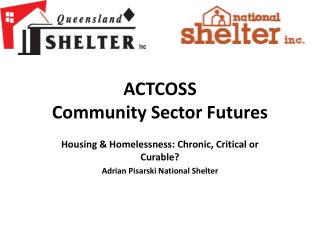 ACTCOSS Community Sector Futures. Housing & Homelessness: Chronic, Critical or Curable? Adrian Pisarski National Shelter. Why is there a problem?. It’s been happening since the 70’s and it is not cyclical! It’s not individual. It’s structural!!!!!!!!. Will it get better or worse?. Sector change - Regulatory futures - . anna walker acorp conference 2 november 2011. a time of change…. much to be

The Mill House &amp; Community Futures - . the clubhouse model. origins what is a clubhouse? membership “work

Voluntary and Community Sector Assembly - . a new vcs assembly for bristol. to ensure that the voluntary and community

Commissioning and the community sector - . getting involved with commissioning. 1 how are services commissioned 2 making

FUTURES - . nick piantek. what are futures??. futures are contracts to buy or sell a specific commodity on a specific day