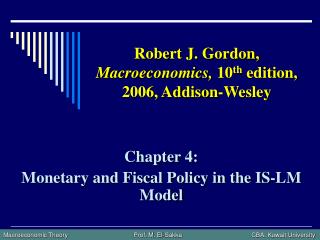 Robert J. Gordon - Unsustainable elements in the new economy: will a future economic expansion ever match the euphoria of

10 th edition - . why do you need to think about plan?. https://www.youtube.com/watch?v=vkfj_ai3pwa. planning as part

The Robert Gordon University - 18/09/2012. the robert gordon university. 2. aim of lecture. outline the steps involved in