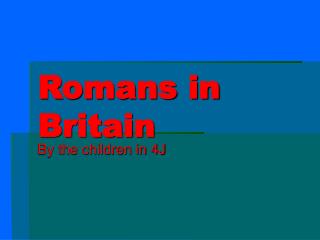 Romans in Britain By the children in 4J When the Romans lived in Britain, they made lots of changes and brought materials and resources that were new to the British people.

Talking About the Romans in Britain - . open the file in powerpoint to add your own text. the photos taken at an english

Romans 8:18-25 - . 18 for i consider that the sufferings of this present time are not worthy to be compared with the

The Anglo Saxons and Beowulf - . questions to answer. what two tribes first settled in britain? when did the romans

PREHISTORIC BRITAIN - . the iberians stonhenge 700 bc the celts 55 bc the romans first invasion 43 bc first settlement

A Review of Romans 1-6 - . romans pop-quiz 3 words or less. what is romans about? what is wrong with the world? who is

TOUR OF ROMAN BRITAIN - . what it looked like!. what to see now!. tour of roman britain. a bit of history

Being a rara avis: the educational experiences of Bulgarian children in schools in Great Britain - . yordanka valkanova.