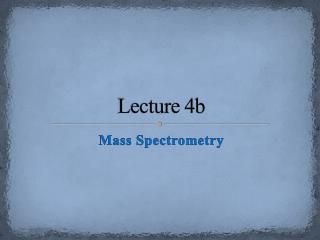 Lecture 4b. Mass Spectrometry. History . J. J. Thompson was able to separate two neon isotopes ( Ne-20 and Ne-22 ) in 1913, which was the first evidence that isotopes exist for stable elements (Noble Prize 1906 in Physics, Discovery of the electron in 1897) Lecture 4B Nash Equilibrium - . this lecture introduces the concept of nash equilibrium. . incentives in the workplace.

Lecture 4b Data Link Layer - . objectives: explain the role of the data link layer in supporting communications across

Lecture 4b- 30 Sept. 2013 Fibre - . overview of lecture 4b fibre fibre structure and classification and effects idatme of