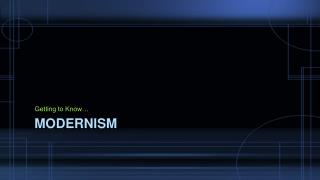 Getting to Know…. Modernism. First… a Definition. Modernism - . aaron c, salvador l, abdullahi a period 2. what is modernism?. american modernism is the idea that humans

MODERNISM - . marco maran. what is modernism?. it describes a series of reforming cultural movements in art, music and

Modernism - . …. …. modernist literature has its origins in the late 19th and early 20th centuries, mainly in

MODERNISM - . the death of the american ideal? 1914-?. the american dream: part i. usa as the “new eden” beautiful

Modernism - . the guiding principles of this movement were: -a break from old traditions , -continual advancement -and

Modernism - . some cultural forces driving modernism some of the major issues to which twentieth century literature