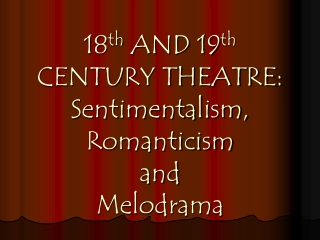 18 th AND 19 th CENTURY THEATRE: Sentimentalism, Romanticism and Melodrama. Many people objected to the disreputable antics of the Restoration plays They disliked: crudeness, sexual comment and innuendo, lack of morals Partly as a reaction, new types of plays were written and performed Popular form of theatre and literature in the 1800’s Originated in France Popular in England, France, and America

Romanticism - . also called american renaissance 1850-1855. what is romanticism?. a movement that considers the rational

Romanticism to Realism - . realism last quarter of 19 th century in some ways a reaction against romanticism and what

Romanticism Quotes! - . by tara aguiar . tenets of romanticism. in romanticism, the main determinant is the mood, the

The Arrival of the Twentieth Century - . impressionism and symbolism. turning away from subjectivity in romanticism and

Romanticism - . an artistic, literary and intellectual movement that originated in europe in the second half of the 18th

Theatre &amp; Cinema - . 20 th century ad. theatre:. plays of ancient india were performed by both men and women as