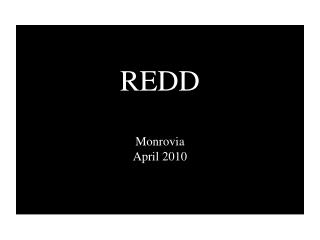 REDD Monrovia April 2010. “People who live with the forests don’t want REDD.”. “We conserve forests because forests are life, not a commodity.”. “Stop selling dignity. [Stop selling] carbon credits.”. “Wherever developed countries emit gas, that’s where they have to reduce it!”. REDD Preparedness 2010-2012 - . main activities of the project: a small grants facility to provide grants of between

Monrovia - By: paul ,charles ,suzy ,amanda. monrovia. day 1. towards the tip of africa the tip is like a deseret and down