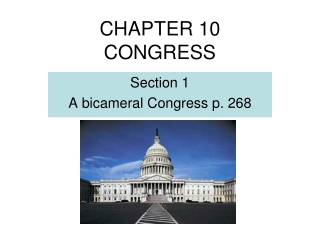 CHAPTER 10 CONGRESS. Section 1 A bicameral Congress p. 268. I. Bicameral Congress: 2 houses. WHY??? Historical reasons: British parliament had two house and so did most of colonies.

Chapter 10: Congress - . chapter 11: powers of congress. penalty. checkpoint: what is the penalty if the president is

CONGRESS Chapter 10 - . bicameralism. congress consists of two houses: the house of representatives and the senate. roots

Chapter 10: Congress Section 1 - . key terms. bicameral : a legislature made up of two houses term : the two-year

10. Congress. - 10. congress. the national legislature. the house of representatives. the senate. 1. term. term. each

Chapter 11: Congress - . the people’s branch congressional elections a. house of representatives (because they are up