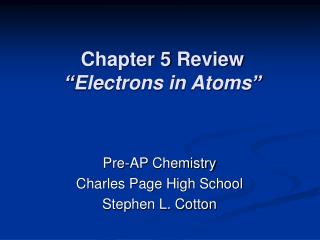 Chapter 5 Review “Electrons in Atoms”. Pre-AP Chemistry Charles Page High School Stephen L. Cotton. Chapter 5 Review. What is the next atomic orbital in the series: 1s, 2s, 2p, 3s, 3p, ? In Bohr’s model of the atom, where are the electrons and protons located?

HSPE Science Review - . questions 1-60. why do atoms bond to one another? a. to gain an octet of electrons b. to become

The Chemistry of Life - . part i – macromolecules and carbohydrates. atoms and elements. physical world composed of 92

Chemical Bonds - . chemical bond. the interaction b/ atoms/ions that results in a decrease in potential energy of the