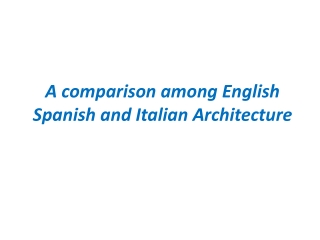 SPANISH-ENGLISH COGNATES - . the languages are more alike than most people think. many of the words from the english

French, English and Spanish Encounters - . i. colonization nations extending control over other regions of the world 1.

Restaurant Vocabulary English and Spanish - . main courses. how would you like your steak?. beverages. click on each

Spanish Decline and English Rising - Before notes, how about an explorer review game!

Spanish Architecture by:Mattie Reeves  - . casa ballo. - this building is made by antoni gaudi. -it is located in

Match the English and the Spanish - . there is i went it will be if i had the money i would like it is you can i want.