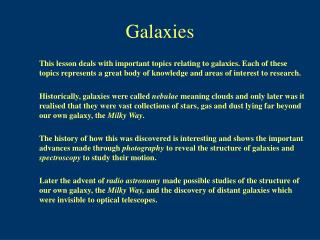 Galaxies This lesson deals with important topics relating to galaxies. Each of these topics represents a great body of knowledge and areas of interest to research.

Galaxies - . the hubble tuning-fork diagram. this is the traditional scheme for classifying galaxies:. elliptical

Galaxies - . chapter twenty-six. note…. i posted as a way to help you a list of topics covered in exam 2 (they are all

Galaxies - . milky way . a galaxy is a large, isolated system of stars held together by gravitational forces. our solar

GALAXIES - . from: jim lochner, usra &amp; nasa/gsfc. what is a galaxy ?. solar system. distance from earth to sun =

Galaxies - 0. note that the following lectures include animations and powerpoint effects such as fly-ins and transitions

Galaxies - . milky way and beyond. galaxies. day 1: types of galaxies. galaxy. a large system of stars held together by

Galaxies - . what is a galaxy?. a galaxy is a large grouping of stars, gas, and dust in space that are held together by

Galaxies - . our galaxy. we live in the milky way galaxy it is made up of about 100 billion stars arranged in a spiral

Galaxies - . 19.3. elliptical galaxies. galaxies that have flat roundish shapes like a football contain billions of stars

Galaxies - . what are galaxies?. a galaxy is a massive, gravitationally bound system consisting of hundreds of billions

Galaxies - . observing logs due april 27th!!. the milky way is a spiral galaxy. most galaxies that we can see are