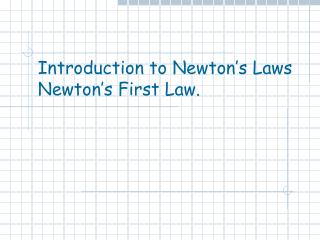 Introduction to Newton’s Laws Newton’s First Law. Isaac Newton. Arguably the greatest scientific genius ever. Came up with 3 Laws of Motion to explain the observations and analyses of Galileo and Johannes Kepler. Discovered that white light was composed of many colors all mixed together.

Newton’s Laws - . inertia. inertia. newton’s 1 st law an object wants to keep on doing what it is already doing in