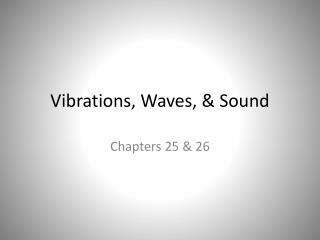 Vibrations, Waves, & Sound. Chapters 25 & 26. 25.1 Vibration of a Pendulum. When the angle is kept small, the period of the pendulum depends only on its length and the acceleration due to gravity. The back-and-forth vibratory motion of a swinging pendulum is called simple harmonic motion.

Waves and Sound - . you may not realize it, but you are surrounded by waves. the “waviness” of a water wave is

Mechanical Waves By: Nicholas B and Michael P - . sound waves. sound waves are created when vibrations bounce of an

Vibrations &amp; Waves - . chapter 25 - this will be phun!. 2 types of waves. mechanical wave : requires a mechanical

Sound - . sound waves. sound waves are longitudinal waves they cause particles of air to vibrate back and forth. a medium

Sound Waves - . sources of sound. sound begins with a vibration. pencils on glass speakers vocal chords air is pushed by

Chapter 25 Vibrations and Waves - . vibration – a mechanical occillation around an equilibrium point wave - a

The Physics Of Sound - . (turn on your speakers). why do we hear what we hear?. how are sound waves produced?. mechanical

Sound - . sound – good vibrations . sound is produced by vibrations moving back and forth. vibrations can be

Sound waves and the Ear - . sound. sound travels in waves. we “hear” vibrations of molecules. speed of sound .

Sound - . sound is produced by vibrations vibration : the complete back and forth motion of an object or material