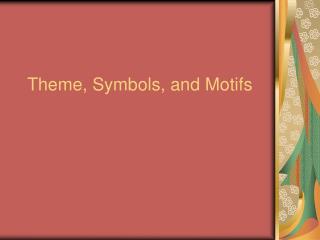 Symbols and Motifs - . how to identify symbols and motifs in literature. what is a motif?. motif: a unifying element in

Symbols and Motifs - . a literary symbol is a concrete thing that stands for an abstract idea. a symbol is anything that

Symbols and Motifs in Shakespeare’s Macbeth - . symbols and motifs. a symbol is something which represents a more

The Matrix – Names, Symbols, Motifs - . just a reminder…. symbols – things in the film that represent more than

Themes, Motifs and Symbols in The Alchemist - . themes. theme: /theem/ -noun 1. a subject of discourse, discussion,

Understanding Conflict in Symbols and Theme - . with examples from lord of the flies. objective. to better understand how

Motifs, Motifs, Motifs - . colors. yellow - wealth and corruption all wilson can think about is “the yellow-car” that