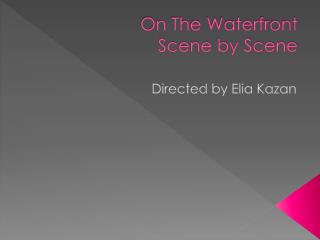 On The Waterfront Scene by Scene. Directed by Elia Kazan. Scene 1 – On the Waterfront. Opening shots set the scene for the film. Soundtrack – forewarns the audience that something sinister is about to take place. On the National Scene - . on the local scene. st. louis msa. 96 major projects $13.5 billion in construction.

Tranquility by Scene - . scene 1. in river’s alliance school, a teacher gives the class a brief history of the setting.

The Scene: - Ssush22 – analyze u.s. international and domestic policies including their influences on technological

Mise -on-scene - . by conor whiting. props. props are very important they can make a film because the props can add

Scene by scene breakdown of My film - . just a quick

SCENE - . the visual imagery strategy. pre-test. today- part 1: our purpose: how well you understand the information.

Scene: - Set the context of the video with images from pearl harbor attack. a headline and an image would work to make

scene - Outer. scene. amazing view. earth. might not be. according to. millionaires. guests. three-day. spaceship.

Act I Scene iii , Scene vi, Scene V - . the plot so far…. polonius gives advice to his son laertes as he goes back to

The Banquet Scene Act III, Scene iv - . your task . in the given groups, you are to decide how to block out and

HAZWOPER On-scene Commander - . who is the on-scene commander?. the senior emergency response official responding to the