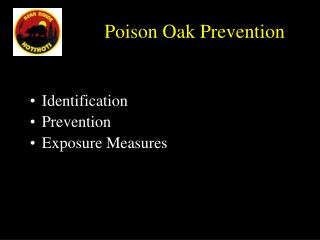 Poison Prevention - . northern new england poison center . poisons can make you sick or kill you. poison labels may have

Camping Guide: Poison Ivy vs Poison Oak vs Poison Sumac - hopperstock.com - When summer approaches, many people get out

Poison Prevention for Everyone - . in the united states nearly 2.5 million people report an exposure to poisoning

Poison Prevention for Everyone - . in the united states nearly 2.5 million people report an exposure to poisoning

Babysitter’s Guide to Poison Prevention - . utah poison control center. what is a poison?. anything someone eats,

Poison Ivy - . the history behind the causes by: shamar lamb. what is poison ivy?. poison ivy is a plant that can cause a

Poison Hemlock - . by: joe beck iii and tayler termeer. conium maculatum. a member of the parsley family up to 6 ft tall