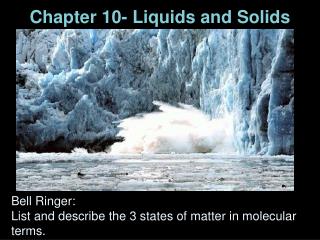 Chapter 10- Liquids and Solids. Bell Ringer: List and describe the 3 states of matter in molecular terms. Studying Solids, Liquids and Gases. The study of solids, liquids, and gases require an understanding of: The kinetic molecular theory The arrangement of atoms within a molecule. Flammable and Combustible Liquids - . insy 3020 spring 2006. where do you encounter flammable liquids. gasoline –

Chapter 43 - . molecules and solids. molecular bonds – introduction. the bonding mechanisms in a molecule are

Chapter 12 Solutions - . a solution is composed of two parts: the solute and the solvent. solute the gas (or solid) in a