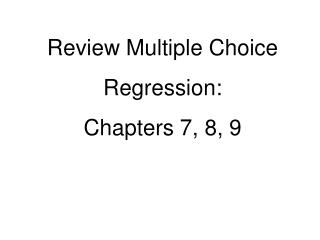 Review Multiple Choice Chapters 1-10 - . the average number of days absent per student per year at west valley school is

Multiple Choice Review - . chapters 5 and 6. 1) the heights of adult women are approximately normally distributed about a

Chapters 7-9 - . key themes. chapter 7:telling stories . what is your story? what part of it will tug at the emotions of

Chapters 7-8 - . characterization note throughout the story that daisy’s voice is her most seductive and distinctive

Chapters 7-8 - . mountains’ tops appeared. dove back with an olive leaf. ark covering removed. came out of the ark.

Chapters 7–8 - . caesar’s triumph (the perfect tense) the flavor of the perfect the trojan war retold (again!) in