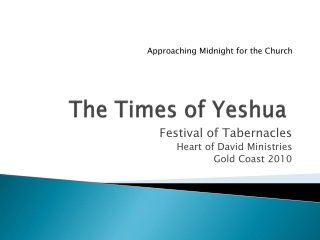 Approaching Midnight for the Church. The Times of Yeshua . Festival of Tabernacles Heart of David Ministries Gold Coast 2010. Major sources of information about first century Israel:. The TaNaK (OT) – by inference – historical foundations/reasons

Sitting at the feet of yeshua - . matthew chapter 10. overview of chapter

Yeshua = Messiah - . proof that yeshua is the coming messiah. proof 1. the most convincing of all my proofs: prophecies.

Yeshua in Passover - . welcome yeshua’s yeladim. please remember these rules. please don’t talk when others are

The Messiah Yeshua is the Lord - Isaiah chapter 53.

Yeshua in Succot - . how yeshua fulfills the feast of tabernacles. sukkot in biblical

The Best of Times or the Worst of Times - Would you rather be alive today or 100 years ago? spontaneous orders and

Beth Yeshua Messianic Congregation - . shabbat service, saturday november 30, 2012 the bible: is there proof that it is

Questions of the Times - . is the price of progress ever too high? is it patriotic to protest one’s government? does

Icons of the Times - . vocabulary pg 293. e xternally (adverb). meaning. example. h aving to do with the outside of

Signs of the Times - . khinckley1@yahoo.com. things we will cover today -or not. will there be an anti-christ? what is

Times Of the Day - . emma lenk. menu. menu . the why?. examples. key words. the special case. the how?. test yourself