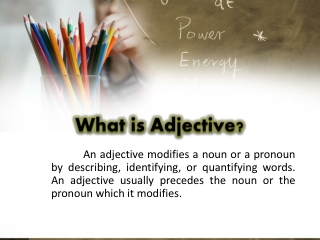 What is Adjective?. An adjective modifies a noun or a pronoun by describing, identifying, or quantifying words. An adjective usually precedes the noun or the pronoun which it modifies. The truck-shaped balloon floated over the treetops. The smalll boat foundered on the wine dark sea.