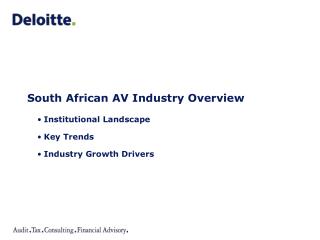 South African property - South africa is the second-largest economy in africa, and foreigners can own unregulated

Proudly South African - . an update presented to the portfolio committee on trade and industry 18 march

South African Apartheid - . what is it?. a south african policy of complete legal separation of the races banned all

South African Extension - . provincial consultative workshops on the development of national policy on extension for

South African War - . 3 distinct phases of the war. war is declared. october 1899: british thought that they would loose

South African Art - . south africa is home to some of the most ancient and beautiful art in the world. during the

South African Holidays - Travel juice is an agency that enables luxury travel to south africa. they offer a varied range