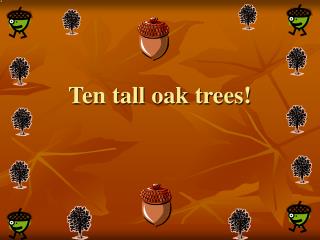 Ten tall oak trees!. Richard Edwards. Richard Edwards is an English poet and playwright. He is known for his comedies and interludes. He was made gentleman of the chapel royal and was the master of the singing boys.

Trees - . chapter 8. chapter objectives. to learn how to use a tree to represent a hierarchical organization of

Dynamic Trees - . goal: maintain a forest of rooted trees with costs on vertices. each tree has a root, every edge

CHAPTER 5 Trees - . trees. root. leaf. definition of tree. a tree is a finite set of one or more nodes such that: there