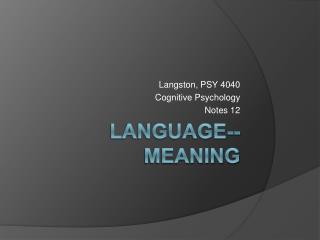 Langston, PSY 4040 Cognitive Psychology Notes 12. Language--Meaning. Where We Are. We ’ re continuing with higher cognition. We still have: Language—Meaning Reasoning/Decision making Human factors. Plan of Attack.

Using Language - 11. using language. denotative meaning. the literal or dictionary meaning of a word or phrase.

Using Language - 11. using language. denotative meaning. the literal or dictionary meaning of a word or phrase.

Figurative Language: Words that Mean More than What They Say - . figurative language. literal meaning: what a word would

Poetry &amp; Language - . a “formalist” approach. poetry and language. course questions practical: what are the

Meaning - Psychology of language--baldwin. meaning. ellis ch. 4: meaning. “ meaning ” as a reference both to:

Language - . lindsey miller and reid scholz. language . language is a system of communication through speech, a

Figurative Language - . words or expressions that have a meaning that is different from their literal meaning (what the

Language, Logic, and Meaning - . usem 40a spring 2006 james pustejovsky. thanks to dan wedgewood of u. edinburgh for use

Lecture 5. Sign and meaning - What is the meaning?. the meaning of meaning is a labyrinth both on theoretical and