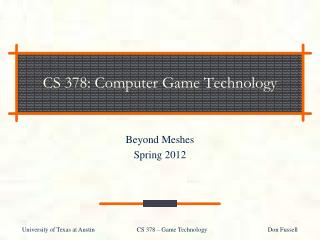 The Computer System - Review game directions: read each of the following questions and corresponding answer choices.

Silicon on Insulator MOSFET Technology: Design and Evolution of the Modern SOI Fully-depleted MOSFET - . presented by:

PlayStation 4 - . by: nickolas kiriazis. the playstation 4 (ps4) is a video game console from sony computer

Introduction to AI in Computer Games - . hojjat jafary fanafzar game studio november 2012. what is ai. how do you think

The Calcium Game: - . calcium. helping you to: create and keep strong bones! click here to play an interactive game.