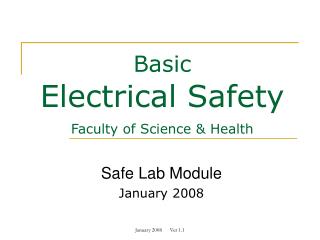 Lab Safety and Equipment - . learning targets “i can…”. -identify and name the various pieces of equipment that are

Electrical Safety - . unqualified worker. session objectives. you will be able to: understand the hazards of electricity

LABORATORY SAFETY AND EQUIPMENT - . laboratory safety. while working in the science laboratory, you will have certain

Laboratory Safety - Safety objectives:. the student must understand the importance of safety in the laboratory as it

Science Lab Safety Procedures - . south mckeel academy. rule 1. conduct yourself in a responsible manner at all times in

Using electricity - . year 1: session 1. we will be learning. ...how everyday appliances use electricity;. that