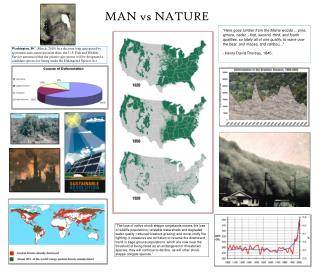 MAN vs NATURE. "Here goes lumber from the Maine woods ... pine, spruce, cedar, - first, second, third, and fourth qualities, so lately all of one quality, to wave over the bear, and moose, and caribou..." - Henry David Thoreau, 1845. Man vs. typhoon - The force of nature meets the stubbornness of

The Nature of Man

The Nature of Man - . romans 6. the nature of man - introduction. introduction man’s existence man’s death is

Nature Vs. Nurture - . by, janelly perez. the debate. for years the nature vs. nurture debate has been an issue in

Nature vs Nurture - Which has more influence over how you behave-- your genetic make-up? or your environment?. nature vs

Nature vs Nurture - . nature . biologically or genetically influenced development some health issues may be genetically

Nature vs Nurture - . list characteristics ( biopotential ) that you have inherited from your parents in the format of

5 Types of Conflict - . conflict. =. a problem in a story. man vs. man. a conflict between two characters. man vs.