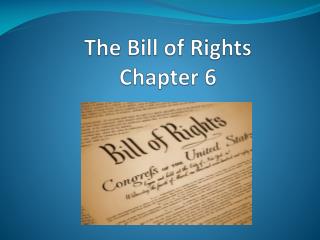 The Bill of Rights Chapter 6 The Bill of Rights Chapter 6. The First Amendment Lesson 1. Essential Questions: How do societies balance individual and community rights? It Matters Because: The rights granted under the First-Amendment are among our most basic freedoms. Guiding Question

The Bill of Rights Chapter 6

Chapter 21: The Revolution in Politics - . the french revolution. 1.liberty. meant: human rights-no limits except those

Texas Bill of Rights - . govt 2306. as with the states (notably the original 13) and the national government as well, the

Employee Rights and Discipline - . the challenges of human resources management. chapter objectives after studying this

APG Unit I Review 2013 - . identify a few key aspects of the british legal tradition that influenced our constitution.

WOMENS RIGHTS - . :the evolution of rights . research question. in what ways has women's rights evolved from the 19 th to

FUNDAMENTAL RIGHTS AND DUTIES - . position in england. rights are unwritten judiciary is the guardian of basic rights

The Amendments - . to the united states constitution. the bill of rights. amendments 1-10. background .

Unit 11: The Civil Rights Movement - . civil rights. the rights that belong to “all persons” in the constitution and

Employee Rights and Responsibilities - . rights that which belongs to a person by law, nature, or tradition.

Chapter 4 - . civil liberties. the bill of rights. the first ten amendments to the constitution are intended to protect