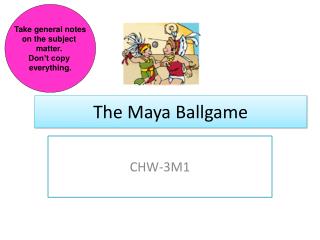 Take general notes on the subject matter. Don’t copy everything. The Maya Ballgame. CHW-3M1. Mesoamerican Ballgame. Exhibit in the New Orleans Museum of Art in 2002 “The Sport of Life and Death” Ballgame: sport, politics, and ritual. Ball Game . Mesoamerican Ballgame - . ballcourt. ballcourt at monte alban. player and uniform. a yoke carved into a fanciful

The Maya - . the maya civilization. 250-900 (classic period) most developed in mesoamerica written language dozens of

The Maya - . the maya. the mayans were the first native americans to develop a written language. why the maya?. the maya

The Maya - . the big idea the maya developed an advanced civilization that thrived in mesoamerica from about 250 until

The Maya - . chapter 23. overview of the mayan civilization. an advanced civilization that included more than 40 cities

The Maya - . the significance of corn. mayan cosmology. earth and water important elements because they are the origins

Take Me Out to the Ballgame - . mixture problems in 2 variables. the problem – stadium chow. on his very first trip to

The Maya - . the period between ad 250 and 900 when the maya reached the height of their civilization and built temples,

The Maya - . what is a civilization?. a culture that has developed systems of government, religion, and learning. the

The Maya - . 1. what do you see in this picture?. 2. this god represented the main food of the maya. what was that food?.

The Maya - . 250 bc to 1190 ad. the mayas. we know they were not called mayas when spaniards arrived, the major city was