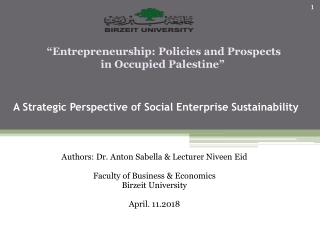 “ Sustainability as a Strategic Imperative” - . col. mark mykleby is a co-author of a national strategic narrative, a

A strategic Approach to sustainability - How to find the money to keep on doing what you want to do. a strategic approach

Developing a Social Enterprise - Kath critchley social firms scotland december 2002 if you were starting a business,

Social Sustainability - . poverty and hunger. kayla baker. many people do not see the effects of poverty… poverty and

Supply Chain - A Strategic Perspective - . can supply chain save the world?. save it from what? what’s happening in our

Supply Chain - A Strategic Perspective - . can supply chain save the world?. save it from what? what’s happening in

A Social Practice Perspective - . the work of t he sprg offers a distinctive perspective for understanding, explaining

A Social Cognition Perspective of Stigma - . a presentation at lawrence university on may 18, 2006 by john b. pryor,