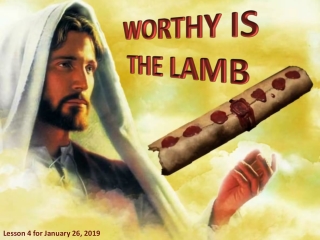 WORTHY IS THE LAMB. Lesson 4 for January 26, 2019. There are four series of seven items in Revelation: 7 churches, 7 seals, 7 trumpets and 7 plagues. The chapters 4 and 5 are the introduction to the second one, the seven seals. -Part 2- The Lamb that Is Worthy - . revelation

Youth Ideas: Songs of Thanksgiving - Worthy Is the Lamb - Another song of thanksgiving to god for christ - the lamb of

WORTHY IS THE LAMB WE VE COME THIS FAR BY FAITH - Thank you lord for giving to methy great salvation so rich and free.

Silence is the Lamb - . adult survivors of childhood sexual abuse and incest. one in four girls. i’ve been hiding and

Revelation Song Worthy is the Lamb who was slain. Holy, holy is He. Sing a new song - To him who sits on heaven’s

Worthy is Our God - . verse 1. poor and wicked rich and righteous all you nations rise and sing weak and needy sick and

The Lamb - . welcome to redeemer!. in the season of lent, we gather together to publicly confess our sin and remember our