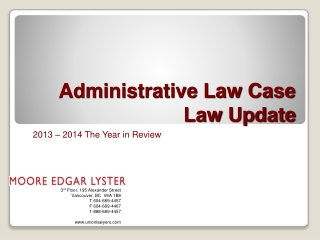 The ADR Smörgåsbord Case Law Update - . sarah williams keating chambers. question one : what should be the response of

Researching Administrative Law - . legal research and writing ii. some basic concepts. what is administrative law? what

WP3 Administrative Units Progress Update - . agenda. status of d3.2 what information has not been collected yet timetable

Internet2 and other US WMD Update - . topics. update on non-merger, newnet (and the control plane), incommon and other