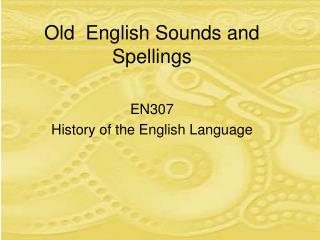 The Sounds of Old English - . how do linguists know about ancient pronunciation?. looking at the alphabet—letter values

Sounds of English - . class 2. sounds of english. consonants: first, the stops: b as in bat, sob , cubby d as in date,

Spellings - . who wants to be a millionaire?. jennifer’s edition. question 1. choose the correct spelling . a necesary

Spellings - Week 3: words ending in i and u . spellings. year

Old English - . the origins of an ever-changing language. a manuscript page from beowulf. anglo-saxon england. modern