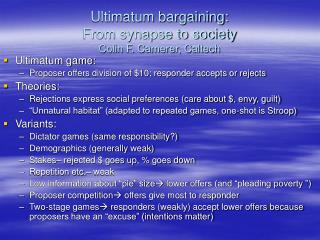 Properties of Synapse - . dr ghulam mustafa. learning objective’s. discuss the properties of synapse or describe the

Chapter 3 Synapses - . the concept of the synapse. neurons communicate by transmitting chemicals at junctions called

Collective Bargaining Clive Thompson - . organisational rights, the duty to bargain and the termination of collective

INTEREST BASED BARGAINING TRAINING - . 2014. ice breaker. what are your expectations?. the labor management relationship.