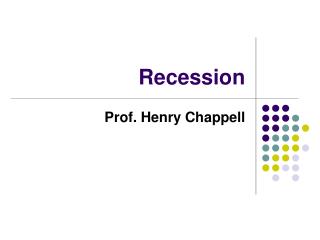 Recession. Prof. Henry Chappell. Introduction. The Recession! An analysis of the current recession in the context of macroeconomic theory as presented in Abel, Bernanke, and Croushore, Macroeconomics, 6 th edition. Recession News. The Facts Recession began in December 2007 RECESSION – WHAT RECESSION? - . agenda what retail is about today? some truths about town revival two brief town

Recession Economics - . why the housing meltdown is hurting the us economy. jon haveman principal february 13, 2008.

Our recession - . how did we get here ? part of the problem was your beautiful house. housing prices. the price of homes

2008 Recession - . in 2008, the us went into a recession recession: a period of economic decline, usually characterized

The Recession Hangover - 1. the structural problems in the financial sector are still not all fixed. 2. there is a

What is Recession? - . before, understanding “recession”, we need to understand the market economy;. a] two stages of