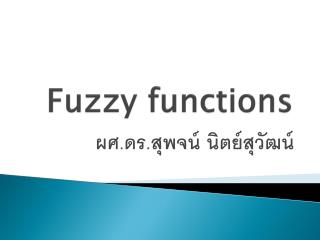 FUZZY MCDM - . fuzzy number. definition is defined to be a fuzzy triangular number if its membership function. operations

Fuzzy Logic - And robot control. fuzzy logic. mundhenk and itti , 2007. problem: . we have a robot and we want it to