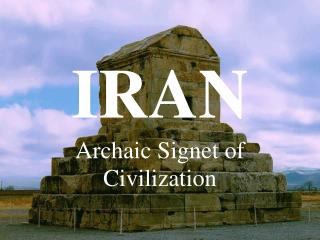 Iran and Persia - . how far have they come by: akeem tate. iran and persia are interchangeable to mean the same country.

The Iranian Government - . why is iran, iran?. iran’s identity is the result of thousands of years of history deep

IRAN - . unwelcome member to the nuclear club. references. the iran threat by alireza jafarzadeh the devil we know by