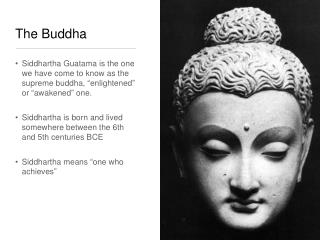 The Buddha . Siddhartha Guatama is the one we have come to know as the supreme buddha, “ enlightened ” or “ awakened ” one. Siddhartha is born and lived somewhere between the 6th and 5th centuries BCE Siddhartha means “ one who achieves ”. Siddhartha ’ s Birth. Fear of Recurrence - Norma lee ma, md, lmft february 24, 2013. fear of recurrence. what we think, we become. all that we

Buddhism - . “everything that arises also passes away, so strive for what has not arisen.” - buddha. three marks of

Buddhism - . bodhi. enlightenment. dharma. the dharma means the sum total of buddhist teachings about how to view the

Buddhism - . buddhism. the age following the epic period in india was a period of tremendous philosophical ferment. most