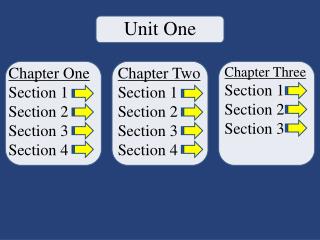 Unit One - . geography: its nature and perspectives. what is geography?. geography is a representation of the whole known

Unit one - . creating a nation. “history is a guide to navigation in perilous times. history is who we are and why we

UNIT ONE - . the dinner party. lead in. brief introduction of the main

Unit one - . basic concepts : syllables, stress &amp;rhythm. listen and identify the sound. the sound of clock the

UNIT ONE - . role and responsibility of the first responder. federal laws and standards. superfund amendments and

Unit One - . what is psychology? ch. 1. p sychology. psychology is the scientific study of behavior and mental processes

Unit One - . era: natural texas and its people cultures of american indians in texas. why historians divide the past into

Unit one - . women of achievement. foreword. for thousands of years the achievements of women have been largely ignored.