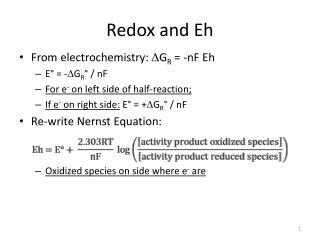 Redox and Synthesis - . redox and synthesis: at the conclusion of our time together, you should be able to:. recognize a

REDOX - . oxidation and reduction chapters 20 and 21. what is redox ? examples. corrosion (rusting) spoiling of food

REDOX - . definition. if oxidation occurs, then reduction must also occur any chemical process in which elements undergo

REDOX - . objective to understand the concept of oxidation-reduction (redox), oxidation numbers, half reactions in