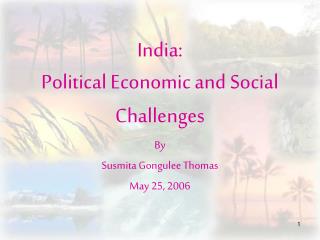 March 24, 2013 - . take a few minutes to study for test. after test…you will do vocab for wwi. use american republic

Imperialism - . &quot;the sun never sets on the british empire&quot;. imperialism. definition: the policy of a

January 8 - . standard 1. conflicts between regional and national interest in the development of democracy in the united

TEST #3 Notes - . civil war and reconstruction vus.6-7. economic and political differences of the north and south.

A Spirit of Change - . the reformers. learning objectives. evaluate the impact of reform movements temperance public

If Development is not Engendered, it is Endangered - . gender concepts. gender…. refers to the economic, social,

18 th Century Social and Economic Change - . the dawn of the agricultural and industrial revolutions. . economic and

Standard - . sswh18 the student will demonstrate an understanding of the global political, economic, and social impact of