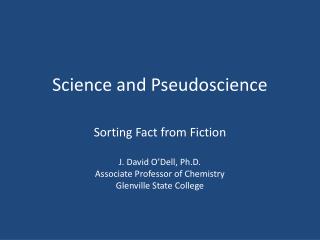 Distinguishing Science from Pseudoscience - . in this tutorial you will learn to distinguish genuine scientific thinking

Is it Science or Pseudoscience? - . kathy saunders university of waikato. aims of the session. discuss the elements of

Pseudoscience - . a belief based on evidence that does not adhere to scientific principles: replicability – can repeat

Complementary and Alternative Medicine: Science, Pseudoscience, and Ethics - Outline. what is cam?philosophies of cam and

Pseudoscience - . science defined:. concept : science is limited to studying only the problems of the natural world that

Pseudoscience - . pseudoscience. an activity resembling science but based on fallacious assumptions

Welcome to Class 2: Science History, Pseudoscience and Theory - . remember: sit only in the first 10 rows of the room.