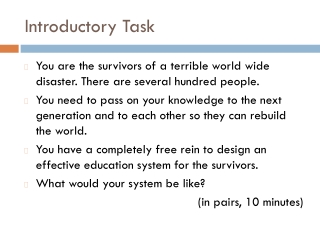 Introductory Task. You are the survivors of a terrible world wide disaster. There are several hundred people. You need to pass on your knowledge to the next generation and to each other so they can rebuild the world. Introductory Paragraph: How Do I Begin? - . introductory paragraph should have the following:. title of the poem, short

AS Psychology Summer Task - . read the case study of ‘brian ’ carefully, then, using information from the following

The Introductory Paragraph - . expository essays. basic structure. there are 4 components to an introductory paragraph

Introductory Chapter - . the sacraments – source of our life in christ. 1. introductory lesson – for first day of

Session 1: Intercessional task review - . if a task does not respond to learner needs – it is not adding value to the

Introductory Example - . suppose we meet a woman and want to determine her age (+/- a year) we can’t possibly just ask

Introductory Task - . you are the survivors of a terrible world wide disaster. there are several hundred people. you need

Testing - . things to deal with in your board set assignment task. task testing. read the booklet with care! do you need